OSA NY/NJ is a non-profit organization, since 1970, is the premier chapter of the international organization named OSA that spans the United States and Canada. OSANYNJ strives to maintain and propagate the cultural heritage of the great Indian State of Orissa among its members and extend unyielding support towards her economical and social development.

There are two types of membership in OSA.
1) Life Members
2) Annual Members

If you are not a member yet, you are welcome to join OSA. To enroll, please fill out the OSA Membership Form and send it to us or enroll at the Registration Desk when coming to participate in any of its events

History of this Organization

The Very Beginning: In 1969, there were not as many Oriyas living around New York as we have now. There was only one Indian grocery store in lower Manhattan, run by an Iranian. ABC Store was the only appliance store, selling 220-volt appliances where Indians would flock in great numbers to make their home-bound purchases. Popular Fabrics was the only sari store located near the Port Authority Bus Terminal. Indian movies were yet to come to the public school auditoriums. Hindi film songs were unheard of in the public broadcasting system. There was no place of worship for Indians. The only annual event was the Dusshera festival in Columbia University where most Oriyas would gather and discover to their delight a few new faces from their own state. This was a time when Oriyas constituted an absolute minority among the Indians, numbering around 20 in the metropolitan New York area. They stuck to each other as part of a joint family scattered around the tri-state area, eagerly looking forward to the weekends for an opportunity of getting together in someone’s house or apartment; eat and discuss Orissa politics; talk about problems facing the immigrant oriya community, and overall, have fun and a good time. One such venue was the house of Late (Dr.) Krushna Mohan Das, who was living in Cambria Heights where more often such activities were taking place and where the concept of creating an association for oriyas was hatched for the first time. This resulted in the formation of an organization called the Orissa Society of New York. 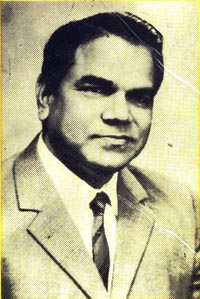 In 1970, Gouri Das, Manamohan Subudhi, Jogeswar Rath, Prasanna Samantray and a few others from the Boston area were actively collecting names of the Oriyas, living in the United states and Canada, in order to compile a directory of Oriyas in North America. When the roll call was over, to their amazement, the headcount exceeded far more than what they originally expected. The time has come for gathering all the oriyas under one umbrella. On October 17, 1970, in Hosmer auditorium of Hartford Seminary Foundation in Hartford, CT, first convention of the Orissa Society of the Americas (OSA) was launched with Gouri Das as the first President. The bulk of this gathering constituted of Oriyas living in the New York area. Thereafter, Orissa Society of New York was renamed as the Ne w York chapter of OSA (OSANY) with Krushna Mohan Das as the chapter president.

OSANY, a founding member of Orissa Society of Americas, Recognized as “New York Chapter of OSA” on October 17th, 1970, at the first OSA convention with Late (Dr.) Krushna Mohan Das as the President. Since then OSANY has been playing an active role in tri-state area of New York, with objective of bringing Oriyas together by maintaining and promoting the unique cultural heritage of this eastern state of India. So far OSANY has successfully hosted 8 conventions, including famous Glassboro convention, Silver Jubilee celebration and recently held 34th annual convention at New Jersey in 2003. Time to time this organization has also sponsored several famous Oriya artists from different fields to perform in North America. Every year, large number of people attends Saraswati Puja, Ganesh Puja and Kumar Utsav. OSANY also celebrates events like holi, picnic and concerts. On these events, our focus is to explore our children’s inherent talents and recognize prodigies along with general entertainment, food and celebrations. The sad part of the history of this organization is that around 1985, this chapter got split into OSANY (New York Chapter) and OSANJ (New Jersey Chapter). Both the chapters under the umbrella of OSA started to run in parallel promoting cultural awareness among younger generation in this area. Recently the management responsibility of both the chapters has been taken over by an enthusiastic group of young people. This group is working cohesively with a strong desire to strengthen this organization and to undertake several developmental projects here as well as in Orissa. New management is working hard to generate interest and awareness, especially among younger generations and make OSANY a model Oriya organization acceptable to all. We encourage all Oriyas to join hands to build a bright future for our children. In the year 2005, the hard work and smiling face of this young management force has made possible to unite this two chapters (OSANY and OSANJ) into a new name OSANY-NJ (Orissa Society of Americas, New Yory – New Jersey Chapter). This unification has brought the past glory back to this organization once for all.